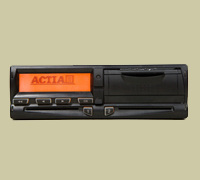 SmarTach integrates several interfaces: 2 card readers, a printer, a calibration / downloading interface, an information display, a visual and sound alarm that informs of any misuse or faulty operation and a memory registering one year of activities.

Standard functions : Functions of driving assistance : A vehicle unit memory: Vehicle Unit has a storage capacity of 365 days of data (except speed which is recorded for the 24 last hours).
A driver card memory: The driver card records 28 days of activity of the driver.